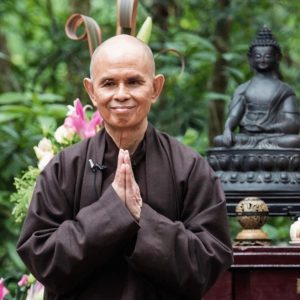 A Vietnamese Buddhist monk, spiritual leader, bestselling author, poet and activist. Born in Vietnam in 1926, he started his monastic education at age 16. Besides fulfilling his ascetic wish, he grew into a prolific writer and a leading activist.

In 1966 when he was 39, following his peace proposal in the United States, he became persona non grata in Vietnam and was forced into exile. He mainly lived in France, creating the largest Buddhist monastery in the West, Plum village.

Thich Nhat Hanh was the face of ‘Engaged Buddhism’; he divided his time between his practice, teaching, and Seva (service to others).

During the Vietnam war, besides writing articles and books – he tended to his compatriots, rebuilt villages and distributed aid where it was needed.
In exile, he promoted interfaith dialogue and organized ‘mindful listening’ between Israelis and Palestinians. He was engaged in protecting the planet and committed to a non-animal diet.

His spiritual teaching is the ancient art of mindfulness in various forms. He reformed it to a modernized and pragmatic vision of Buddhism well adapted to Western culture. He is the origin of the worldwide secular mindfulness movement.

In 2005, after 39 years in exile, he was finally allowed to visit Vietnam. In 2018 at age 91, after experiencing health complications, he returned to his country and root temple ‘Từ Hiếu Temple’ for the remainder of his life. He died there on 22.01.2022.

In the H.H. Dalai Lama’s words, ‘he lived a truly meaningful life.’

Lone Kristensen
I first met Iyengar yoga in `95, as I moved to Copenhagen after 3 years of rigorous dance training in London. My whole being was grateful and happy with the change and I soon læs mere >>

Thomas Humpert
I was born in Munich, in 1965. In 1984 during my first visit to Nepal, I came in contact with Tibetan Buddhism and decided to join the renowned November course in Kopan monastery.  læs mere >>

We use cookies on our website to give you the most relevant experience by remembering your preferences and repeat visits. By clicking “Accept All”, you consent to the use of ALL the cookies. However, you may visit "Cookie Settings" to provide a controlled consent.
Cookie SettingsAccept All
Manage consent

This website uses cookies to improve your experience while you navigate through the website. Out of these cookies, the cookies that are categorized as necessary are stored on your browser as they are essential for the working of basic functionalities of the website. We also use third-party cookies that help us analyze and understand how you use this website. These cookies will be stored in your browser only with your consent. You also have the option to opt-out of these cookies. But opting out of some of these cookies may have an effect on your browsing experience.
Necessary Always Enabled
Necessary cookies are absolutely essential for the website to function properly. This category only includes cookies that ensures basic functionalities and security features of the website. These cookies do not store any personal information.
Non-necessary
Any cookies that may not be particularly necessary for the website to function and is used specifically to collect user personal data via analytics, ads, other embedded contents are termed as non-necessary cookies. It is mandatory to procure user consent prior to running these cookies on your website.
SAVE & ACCEPT