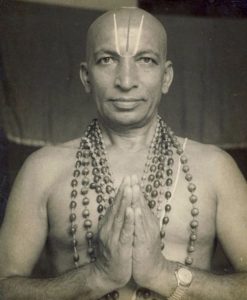 Widely acknowledged for being the father of modern postural yoga. However, the credit for the popularity of today’s yoga goes to his foremost students, who were not more than half a dozen in number.

Three of his most prominent students were:

Krishnamacharya was a scholar, healer, and a yoga teacher; he studied Sanskrit, logic, the six darshan (the six traditional philosophical systems) and Ayurveda.
In addition, he lived at the foot of Mt Kailash (in the Himalayas) for 7 years. Here he studied, Asanas, Pranayama, the Yoga Sutra of Patanjali (the foundational text on yoga practice) and the therapeutic use of yoga.
At the end of his stay, his teacher, [Ramamohana Brahmachari], instructed him to return to his home in Mysore, to lead a household life and teach yoga.

In the words of BKS Iyengar;

Krishnamacharya had a versatile personality, his moods and modes were difficult to comprehend and often unpredictable. It was an enormous task to approach him or to argue with him at his level. He was a hard taskmaster who would not tolerate any compromise or slackness with precision. This high calibre intelligence, scholarly background, fiery eyes, well-built physique and strong personality paradoxically isolated him.

Irony of fate
After following his Gurus´ wish and getting married, (and before a broader recognition of his knowledge and capacity), T. Krishnamacharya got a job on a coffee plantation in Karnataka. He used to dress differently, wearing half pants and half sleeve shirts, socks and shoes a hat on his head and a stick in his hand.
It was unimaginable to see a man dressed in such a manner (meaning; he was dressed like a simple worker) who had studied the Sad-darsanas, with titles like Samkyayoga-Sikhami, Veda-kesari etc…
But destiny had played its trick even on him and he had to work in a coffee plantation.

Past and present Yogis, Gurus and Teachers

In her father’s light – Interview of Geeta Iyengar

Are we all crazy?

Lone Kristensen
I first met Iyengar yoga in `95, as I moved to Copenhagen after 3 years of rigorous dance training in London. My whole being was grateful and happy with the change and I soon læs mere >>

Thomas Humpert
I was born in Munich, in 1965. In 1984 during my first visit to Nepal, I came in contact with Tibetan Buddhism and decided to join the renowned November course in Kopan monastery.  læs mere >>

We use cookies on our website to give you the most relevant experience by remembering your preferences and repeat visits. By clicking “Accept All”, you consent to the use of ALL the cookies. However, you may visit "Cookie Settings" to provide a controlled consent.
Cookie SettingsAccept All
Manage consent

This website uses cookies to improve your experience while you navigate through the website. Out of these cookies, the cookies that are categorized as necessary are stored on your browser as they are essential for the working of basic functionalities of the website. We also use third-party cookies that help us analyze and understand how you use this website. These cookies will be stored in your browser only with your consent. You also have the option to opt-out of these cookies. But opting out of some of these cookies may have an effect on your browsing experience.
Necessary Always Enabled
Necessary cookies are absolutely essential for the website to function properly. This category only includes cookies that ensures basic functionalities and security features of the website. These cookies do not store any personal information.
Non-necessary
Any cookies that may not be particularly necessary for the website to function and is used specifically to collect user personal data via analytics, ads, other embedded contents are termed as non-necessary cookies. It is mandatory to procure user consent prior to running these cookies on your website.
SAVE & ACCEPT